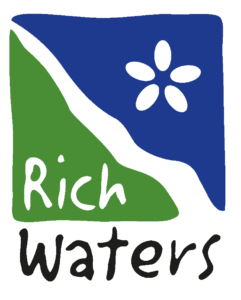 This is a summary of the report of implementation and results from the LIFE IP Rich Waters action ”Stopping internal phosphorus leaking – a full lake treatment”. The full report is available in Swedish.

In action C13 (“Stopping internal phosphorus leaking – a full lake treatment”) within LIFE IP Rich Waters we set out to remediate the internal load of lake Norrviken through an injection of aluminium chloride in the lakes´ sediment. The project was mainly run by the municipalities of Upplands Väsby and Sollentuna. The County Administrative Board of Stockholm was also part of the project group.

At the start of the project, a so-called 12: 6 consultation was carried out when a notification for the aluminum treatment was sent to the County Administrative Board. As part of the consultation, an information meeting was also held for the public in Sollentuna. The meeting was well attended with about 100 participants.

Prior to the treatment, supplementary studies were also carried out regarding the copper content in the sediments (from previous copper sulphate treatment), modeling of the effects of different methods, and a side scan sonar. Everything to prepare us for setting requirements when procuring the contract itself.

During the period 1 April to 8 July 2020, Norrviken was treated. During the treatment, 936.33 tonnes of polyaluminum chloride solution (i.e. about 90 tonnes of aluminum) were added to the (soft) bottoms deeper than 4 meters in Sollentuna municipality. The treatment was carried out with the harrowing method, which meant that the top 20 cm of the sediments were treated.

To follow up the effects of the treatment on the lake, an environmental monitoring program was carried out before, during and after the treatment. The results show that the treatment reduced the amount of nutrients in the water. The phytoplankton biomass and the proportion of cyanobacteria in it have also decreased after the treatment (though not so markedly). The water has become clearer and we are seeing an increased deep spread of macrophytes. We saw no clear indications of changes in the zooplankton society or the fish society, nor regarding the environmental toxin content of perch. For the benthic fauna, we saw a deteriorating status after the treatment. However, the final effects of zooplankton, fish and benthic fauna are considered to require more time to provide a clearer outcome. Continued environmental monitoring is required.

The project is perceived to have led to both an increased knowledge of existing eutrophication problems as well as an increased acceptance of the treatment method and the positive effect on the environment to which it contributes.

Through the project, a better collaboration with other participating partners in LIFE IP Rich Waters has been established. Above all, new contact paths have been opened up and the conversation has become more transparent and open, which has contributed to a greater understanding of the mandates and decision-making paths of various actors involved.

The socio-economic effects of the project are many. The project has created new jobs and business opportunities and led to the establishment of networks and the development of local capacity. The knowledge and competence has increased widely and we see some spreading effects of the project. The project will also be able to influence property prices in the area and improve the citizens’ health and well-being since the recreational experience around the lake is improved.

The project has also had effects on several ecosystem services. Primary production has decreased in the water column while the habitat for benthic macrophytes has increased. Sediment retention has also increased. Recreational experiences and aesthetic values have improved and science and education have increased as a result of the project.

The project’s partners have identified several benefits, both financial and in terms of knowledge and PR, as a result of the project. The project has, and will in the future, be able to function as a model for other municipalities that are about to carry out similar work.